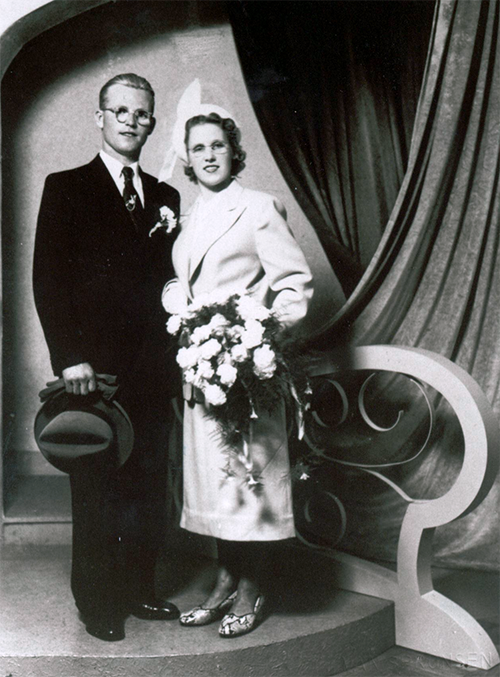 Auke & Sarah Valk came to the United States in 1950 after the German armies had ravished their motherland, Holland, during World War II. Kingsport businessman C. P. Edwards selected Auke and Sarah, along with two other Dutch families, to share in his dream for success in the Model City.

The first four years were very trying; but, after hard work and dedication to family, honesty and God, they constructed a small retail garden center called Ridgefield’s Garden Center in downtown Kingsport, as well as growing greenhouses in Ridgefield’s subdivision. Another store was built in the early 60’s in Johnson City, but when Mr. Edward’s empire began to fade in the mid-60’s, the second location was abandoned. In 1966, because of the Valk’s hard work, Mr. Edwards sold the garden center and greenhouses to them and Evergreen Garden Center & Landscaping Co., Inc. was founded.

In 1967, the Valk family constructed a new location on Industry Drive. Tremendous retail growth followed and in 1973 construction began on the present location on Riverport Road. In October 1975, Evergreen opened the doors to the most modern garden center in the region. Aggressive purchasing included greenhouse plants, shrubs and trees, foliage plants, hard goods lines and a complete landscape service. Again, Evergreen experienced phenomenal sales and internal growth. By this time, Auke, Sarah, and their four sons were involved in the day-to-day operations.

In 1989, Evergreen purchased a small garden center in Colonial Heights to service the area due to increased competition and consumer demand. This location has grown from a small roadside location to the Tennessee Nursery and Landscape Assn. choice as ‘Garden Center of the Year’ in 1994. In March, 2004 we completed construction of our current location in Colonial Heights at 1876 Moreland Drive.

In 1990, Evergreen moved many of the greenhouse production responsibilities to another site located near the parent location on 1401 Riverport Road. Computerized heat/vent controls and computerized irrigation are examples of state-of-the-art technology used at this facility. Today, over 95% of the plant materials grown at this facility are used to supply our own retail locations. In 2012 we closed this growing facility to focus on the ever growing needs of our retail garden centers.

In 1994, Evergreen Home and Garden Showplace joined a group of 500 premier garden centers from across the nation with TruServ/H&G Showplace. Participation in this group has provided us with a broad range of new products and consistent store displays.

In 1995 Evergreen Home and Garden Showplace helped form a group of garden centers from Tennessee, Alabama, and Georgia, known as the TAG Garden group. This association allows its members to share management ideas and purchasing opportunities, as well as lowering product costs.

In 2004, we celebrated our first 50 years in business, bringing the finest garden products and services to an ever-expanding market area.

In 2007, we began a new association with The Garden Center Group. We are excited about this new opportunity, which will allow us to learn new ideas and techniques from other independent garden centers across the country, as well as sharing and comparing marketing and financial.

In September of 2018, The Green People moved our staff, products and gardening secrets to our more central location across from Food City on Fort Henry Drive. Many renovations are still in progress with greenhouses being moved from our former location to Colonial Heights.

Please visit The Green People at 1876 Moreland Drive to see how we can help you with your gardening success.